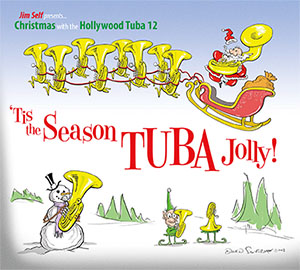 Tuba Artist Jim Self presents "Christmas with the Hollywood Tuba 12, 'Tis the Season Tuba Jolly - A new jazzy Christmas CD featuring a band of all the best tuba players in Los Angeles and includes Kim's arrangement of "Let It Snow (in the Jungle)". The album will be released on October 1, 2013.

From the album's facebook page: "`Tis the Season TUBA Jolly features 12 part arrangements of twenty of the greatest holiday songs played on Santa’s favorite instrument – the TUBA. Listening to this recording will put you in the holiday spirit and will be good for your nerves, winter colds and hangovers – kind of like a massage. Sit by the fire with a toddy and turn up the stereo. Surround yourself in the warmth of 12 tubas. You will sleep like a baby while visions of sugarplums dance in your head."